What does “moving up the career ladder” really mean? Does it have to entail becoming a manager? Not at all. Not at NIRA, at least. Meet Jonas Josefsson and Tobias Hammarling, who both started off as summer interns, and went on to become Computer Vision Specialists, exploring future technologies – with an autonomous team of their own.

After 11 years at NIRA, there’s probably nothing Jonas hasn’t been involved in already. In fact, he’s been part of all the company’s teams and worked with all of NIRA’s products in one way or another – from developing algorithms to working with integration, troubleshooting and software testing in a car… somewhere in Death Valley. With all that experience, Jonas has of course been offered the traditional career path – to become a manager. But like his colleague Tobias, he chose another way. And yes, they would both recommend others to do the same. 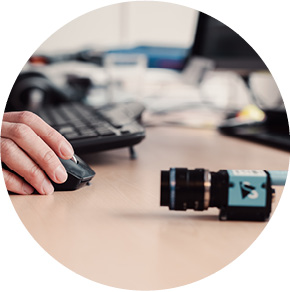 As for Tobias, It’s been about four years since he joined, after a summer internship sparked his interest in sensor fusion. Specializing in this area has proven to be a perfect choice, because today he’s got what many engineers would probably consider a dream job: being able to work freely on developing future NIRA technologies. More specifically: Computer Vision.

Playing a central role in the Vision team at NIRA, Jonas and Tobias works on camera based algorithms to improve a vehicle’s perception of the road. Put simply, it’s about making the camera understand what it sees, to determine if there’s snow, ice or water on the road. Surely, there are other companies specializing in this area, but combined with NIRA’s world-leading competence in friction estimation, it makes for a unique offering. Not to mention a unique job position – almost like working on a startup from within the walls of a very established company.

“NIRA really puts a lot of trust in its employees. You get all the freedom you could ever want, and if you’re passionate about something, you are definitely encouraged to work on it”, says Jonas.

Working autonomously on building up on whole new area, such as Vision, is of course a challenge: “When we started working with Vision, the framework was there – and it was a lot to take in – but the road ahead was far from set. Normally, there’s a customer at the other end, and you have specific requirements to adhere to. This is more about exploring new technologies, which is a challenge of another kind”, says Tobias.

“But that’s also what makes it so exciting. In many ways, it’s about breaking new ground”, Jonas concludes.